The win also completed a perfect season and the team’s goal of avenging last year’s TOC loss to Eastern.

Since the tournament began in 2006, the Royals have appeared in eight tournament title games and ten tournaments overall. Friday’s matchup was also the seventh time the two squads met in the final.

The season was also historic due to the Royals being ranked as the best team in the country by Max Field Hockey. The team only allowed nine goals all season, outscoring opponents 168-9, including 20 shutouts.

“It was a historic year for Oak Knoll field hockey, and I couldn’t be prouder of this group of student-athletes,” said Ali Good ’95, head varsity field hockey coach.
The team embraced a theme of “Whatever it Takes,” Good said.

“The season was over three months of grueling runs, six days a week of training and countless hours of time and dedication,” she said. “They brought a level of passion, dedication and teamwork that every coach hopes for.”

In addition to talent and skill, she said the team exhibited heart.

“It’s nice to see all of your efforts pay off with championships and top rankings but more importantly these student-athletes have won so much more,” she said. “They have made bonds that will last a lifetime, memories that they will never forget and they have learned what it takes to succeed.”

The Royals made it to the TOC after defeating Clearview Regional High School in the tournament semifinals, Camden Catholic in the state group championship and Morristown Beard in the sectional title game. 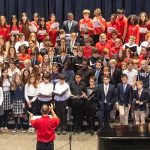